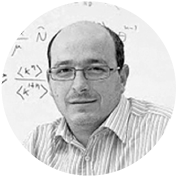 Professor & Director of the Institute for Biocomputation and Physics of Complex Systems (BIFI), Edificio I+D+i, C/ Mariano Esquillor s/n, Campus Río Ebro, University of Zaragoza, Spain.
Professor at the Department of Theoretical Physics, Faculty of Sciences, University of Zaragoza, Spain.
yash91mir.mo9coxawreno@gmail.com
+34 976 762993  | +34 976 762990
PUBLICATIONS
CURRICULUM VITAE
Short Bio
Prof. Yamir Moreno (Havana City, 1970) got his PhD in Physics (Summa Cum Laude, 2000) from University of Zaragoza. Shortly afterward, he joined the Condensed Matter Section of the International Centre for Theoretical Physics (ICTP) in Trieste, Italy as a research fellow. He is the Director of the Institute for Bio-computation and Physics of Complex Systems (BIFI), the head of the Complex Systems and Networks Lab (COSNET) and Professor of Physics at the Department of Theoretical Physics of the Faculty of Sciences, University of Zaragoza. Prof. Moreno is also a Deputy Director of the ISI Foundation in Italy and External Professor of the Complexity Science Hub Vienna, Austria. During the last years, he has been working on several problems such as: the study of nonlinear dynamical systems coupled to complex structures, transport processes and diffusion with applications in communication and technological networks, dynamics of virus and rumors propagation, game theory, systems biology (the TB case), the study of more complex and realistic scenarios for the modeling of infectious diseases, synchronization phenomena, the emergence of collective behaviors in biological and social environments, the development of new optimization data algorithms and the structure and dynamics of socio-technical and biological systems. He has published more than 240 scientific papers in international refereed journals

, is a Highly Cited Scientist and serves as a reviewer for around 30 scientific journals and research agencies. His research works have collected more than 21000+ (35000+) citations, h=56 (69) according to ISI WoK (Google Scholar), including the most cited Physics Reports (Complex Networks and their applications, Phys. Rep. 424, 175-304 (2006), 6100 (10500)+ citations). Prof. Moreno has supervised 9 undergraduate and 13 Ph.D. Thesis at the University of Zaragoza. Currently, 5 more Ph.D. theses are being supervised. At present, he is a Divisional Associate Editor of Physical Review Letters, Editor of the New Journal of Physics, Chaos, Solitons and Fractals and Journal of Complex Networks; and Academic Editor of PLoS ONE, and a member of the Editorial Boards of Scientific Reports, Applied Network Science, and Frontiers in Physics. Prof. Moreno is the elected President of the Network Science Society (NSS) and served as President of the Complex Systems Society from 2015 to 2018. He was a member of the Future and Emerging Technology Advisory Group of the European Union’s Research Program: H2020 and of the Advisory Board of the WHO Collaborative Center “Complexity Sciences for Health Systems” (CS4HS), whose headquarters is at the University of British Columbia Centre for Disease Control, in Vancouver, Canada. He was an ISI Fellow from 2013 to 2017.